Castleberry Hill while Traveling at the Speed of Bike 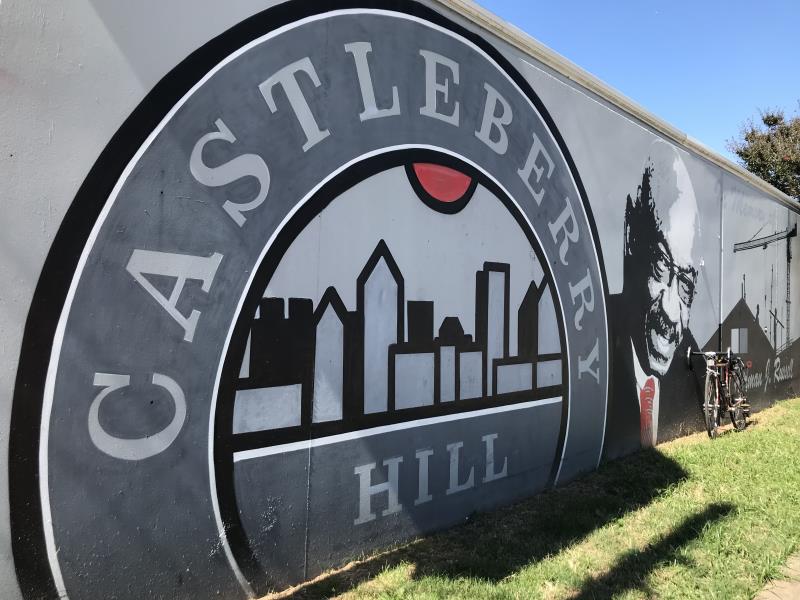 This mural welcoming you to Castleberry Hill features a man named Herman J. Russell, who was a Black real estate developer in Atlanta during the 1960s Civil Rights era. I read and absolutely loved his autobiography (titled Building Atlanta: How I Broke though Segregation to Launch a Business Empire). According to its website, H.J. Russell & Co. (founded in 1953 and headquartered in Atlanta) is the largest minority-owned real estate and construction company in the U.S. Its new Russell Center for Innovation and Entrepreneurship (RCIE), just around the block from this mural, is the largest center in the country, driven by community impact, devoted to empowering African American entrepreneurs and small business owners. 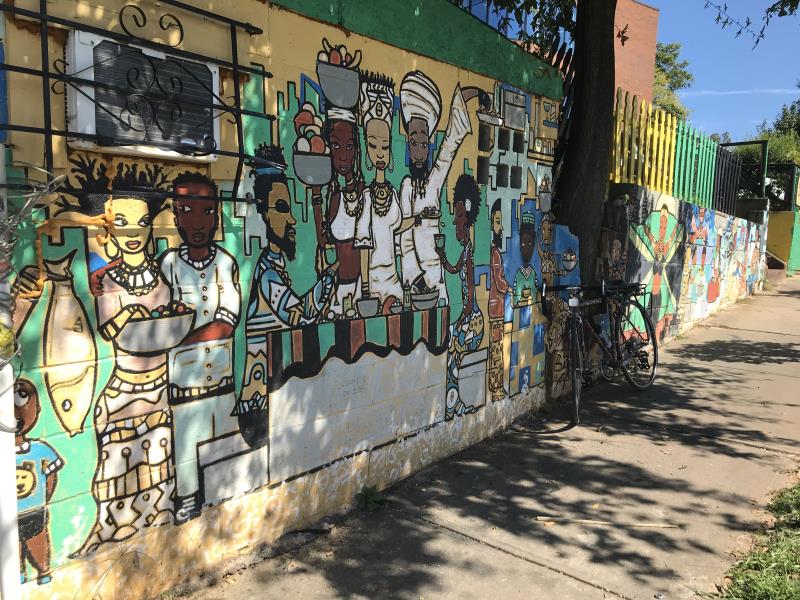 This mural is on the side of restaurant named Dat Fire Jerk Chicken. There was a busy line for takeout when I rode by. It's on dangerous-by-design Northside Drive, by the way, so consider walking your bike on the sidewalk until you get to Fair Street (which is where this mural is). (Fun fact: If you cross Northside Drive at this point, Fair Street changes names to Atlanta Student Movement Boulevard and takes you directly to Atlanta' famous Historically Black Colleges and Universities. I'll do a separate tour of them for you soon.) As a vegetarian, I didn't sample the jerk chicken, but I did get a terrific elderberry ginger shot from Ju-Tox, the juice detox place around the corner on Walker Street! (And I promised the owner Spanky that I'd be back with a friend to team-tag pedal the bike blender for a smoothie. Who wants to come?) This mural by Muhammad Yungai, titled "Community Roots," was part of the Off the Wall series of murals commissioned for the Super Bowl in 2019. Of all the participating Off the Wall artists, he is the only one who was chosen by popular vote (and he ended up having three murals as part of the series). (Note: there is now a fence in front of the mural.) "Community Roots” speaks to the resurgence of farming in inner city communities and the connection that the Historically Black Colleges and Universities (HBCUs) not far from Castleberry Hill have to their nearby neighbors. The Westside of Atlanta has the highest concentration of urban farming in the city. A major urban farm for growing not just food but community in Atlanta is the Truly Living Well Center for Natural Urban Agriculture, located just past the HBCUs. Many urban farmers are graduates of its New Farmer Training Program. The man on the right in this mural, Rashid Nuri, was the founder. He's a good friend of mine, and I strongly recommend his book, Growing Out Loud: Journey of a Food Revolutionary. (You may enjoy my review of it here: https://travelingatthespeedofbike.com/2019/07/08/growing-out-loud/) 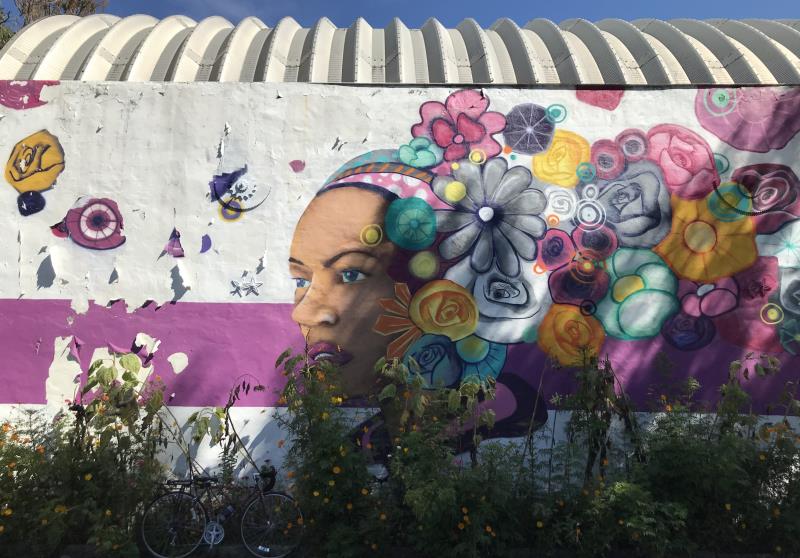 I love this wall and the two murals that I've seen there over the years. I especially love how they have each incorporated the flowers that grow right beside that wall into the essence of the design. Note that across the street from this mural is another stunning work of art. 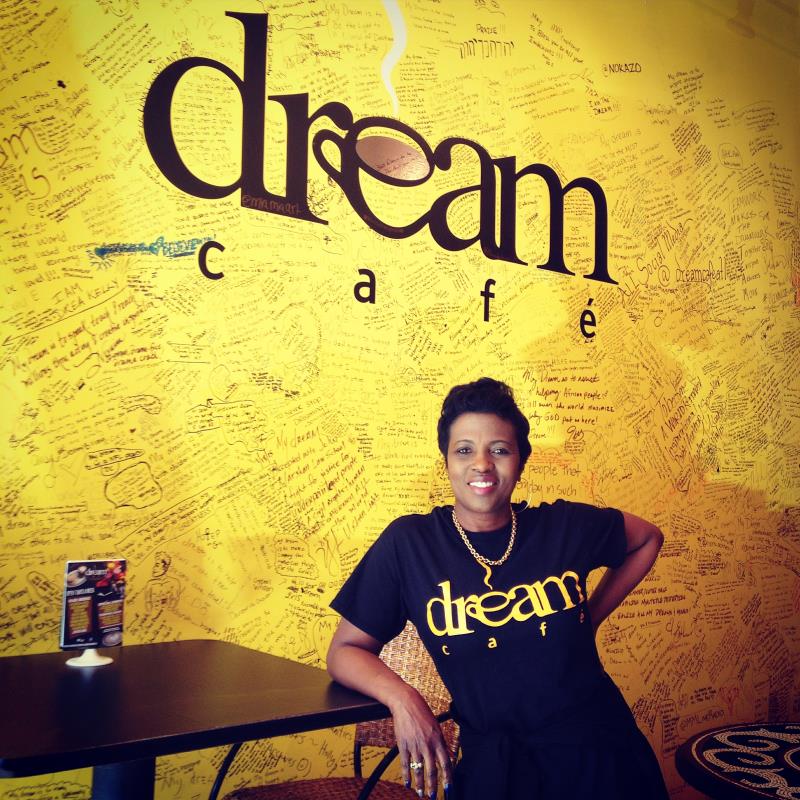 Okay, this wonderful coffee shop/cafe/performance space is no longer there, but it was one of my very favorite places. The entire wall was covered with people's hand-written dreams. Gotta love that, right? The owner Stevie Baggs Jr had been a professional football player, and he wrote an inspirational book named Greater than the Game that I read after his mother, Lola Robinson (pictured) told me about it! Anyway, this space is now empty on charming Peters Street. But one can dream of what will be there next. Who is Howard? Who is his son? This is what I love about traveling at the speed of bike! You end up so curious about things that you would never have had the time or ability to notice in a car. Hmmm. I can't find an answer online. I guess I'll just need to stroll in and say hello next time! There are so many things I love about this mural, mostly that many women of color are taking photos of themselves in front of it and posting them on social media. Questions that this mural suggest include: What is beauty? Who decides? I also encourage you to take a look at Peters Street right next to this mural and the large orange blockades that have been placed there (and throughout the city) to discourage street racing (which has escalated during the pandemic). These beg the questions: Who decides who is allowed in public spaces? Who decides when, where, and how? Who decides which activities get accommodated and which get penalized?

New Orleans' based artist Brandon "B-mike" Odums created this piece, titled “Survival Against All Odds” as a representation of Atlanta, and the strength and resilience that’s required for the city to become and remain an equitable place for all. The flexing child represents Atlanta's future and the flowers behind him represent his growth. The child in the mural is Halo Epps, son of Tauheed Epps, more commonly known around his home city of Atlanta as ‘2 Chainz’. (If you're into exploring beyond Castleberry Hill, B-mike has another mural just a couple of blocks away in South Downtown on Broad Street.) 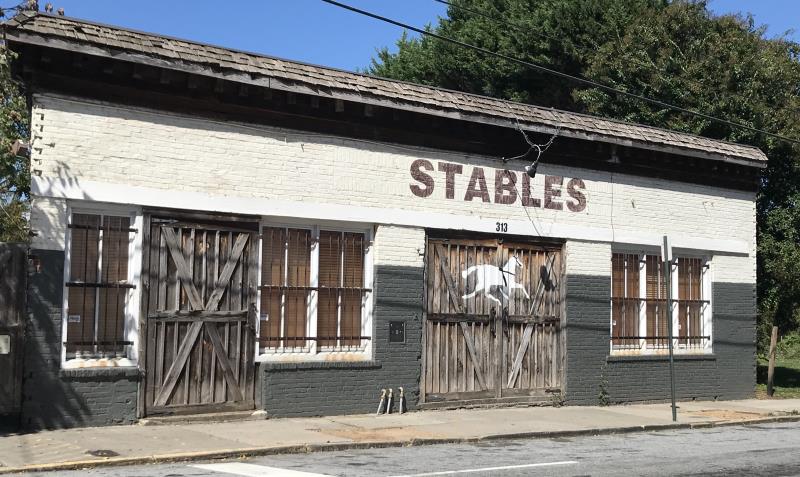 I pass this building all the time and have always thought it was abandoned but I just looked it up and it turns out it was converted into lofts and I'm guessing people live there now. The entrances are on the other side, I guess to preserve the historic front. Anyway, interesting! Am glad this building still exists. Wait 'til you see how charming it is on this street, right in the shadow of Downtown Atlanta. This is a small snippet of the total number of naked Barbies that are on and around this loft. It's on a little side street off of Nelson. Wander around and you'll find it! (It's worth it.) 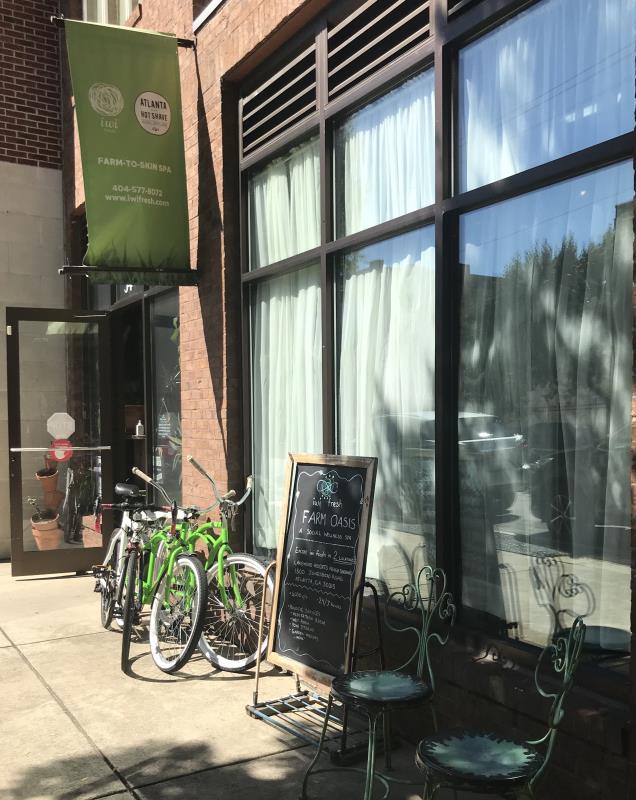 While on Nelson near the end of the tour, you'll pass this charming storefront named iwi Fresh Farm-to-Skin Spa. I met the owner, Yolanda Owens, a couple of years ago and featured her in my Today's Nice Stranger street portrait series (plus my daughter attended a party there once), and I gotta tell you, this place is a true find. It's a vegetative sanctuary inside. If you're looking to treat yourself or give a gift card for some body care to a loved one, check out this place. Here's the website: https://iwifresh.com 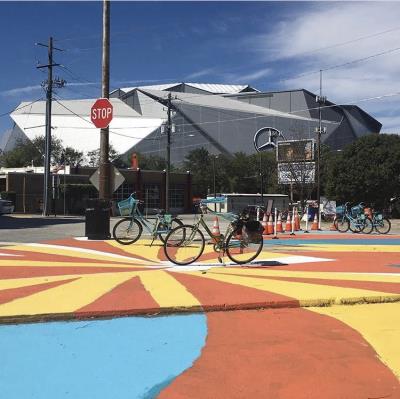 The public was invited to paint this street mural around the bike share station a few years ago. It has since fallen into some disrepair but is till worth a stop because you get a cool view of MercedesBenz Stadium an dDowntown Atlanta from here. 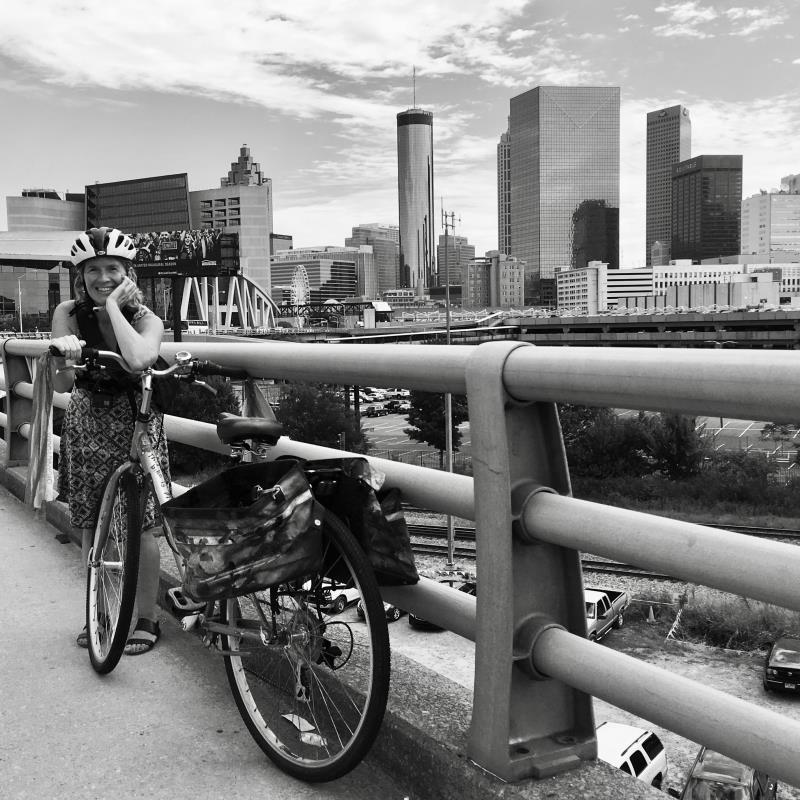 The last stop on the tour puts you in this great photo spot, with the word "Atlanta" right over your shoulder.