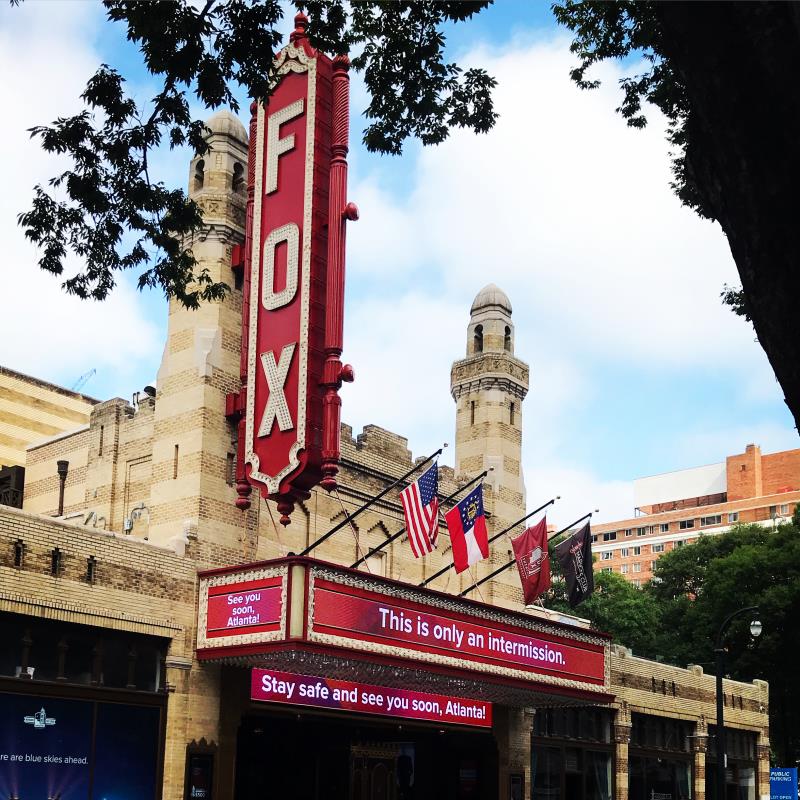 Start at the historic Fox Theater on the corner of Peachtree Street and Ponce de Leon Avenue. The vintage ticket booth in the front hosts the Tiny Door (which is a replica of it). Look down! Stop at the Little Free Library on the corner of 5th Street and Myrtle. it's one of my fave in Atlanta, and is always stocked with a good quality selection. I even left my book, Traveling at the Speed of Bike, for you! 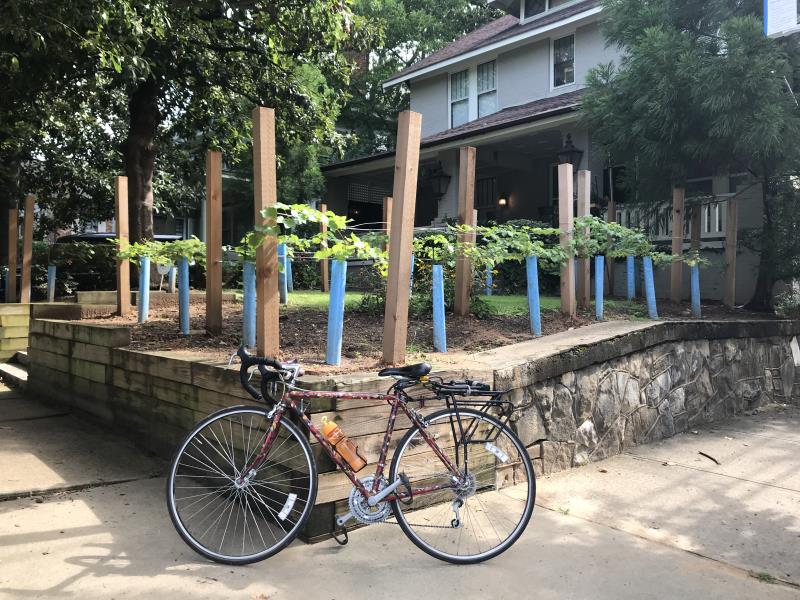 Myrtle Street has some pretty, interesting houses (and a beautiful tree canopy that makes it a good 10 degrees cooler on hot days). This one boasts a new vineyard on the front lawn! The 10th Street Cycletrack used to be a real stunner. It was even named one of the top ten bike lanes in the USA by People for Bikes. But maintenance is key, right? And this lane seems to be constantly missing its bollards, which does create safety hazards. So be extra careful here and keep maintenance needs in mind when you advocate for protected bike lanes where you live. If there is a parked truck, walk your bike around it on the sidewalk, not in the oncoming travel lane. You can report a blocked bike lane in the City of Atlanta by calling (404) 750-2263, if you are so inclined. I only take you onto the Atlanta Beltline's Eastside Trail as far as the first bridge, under which you'll find this Tiny Door. I find the rest of the Eastside Trail too crowded lately for my comfort during COVID-19, but if you catch it on a more empty day, you can go about another mile to the next bridge, under which you'll find another Tiny Door. Just after that bridge is a spur path to the left. If you take it to the little street (not up the hill), there's yet another Tiny Door on the King of Pops wall. (Also, why not buy a pop and take a little break?) 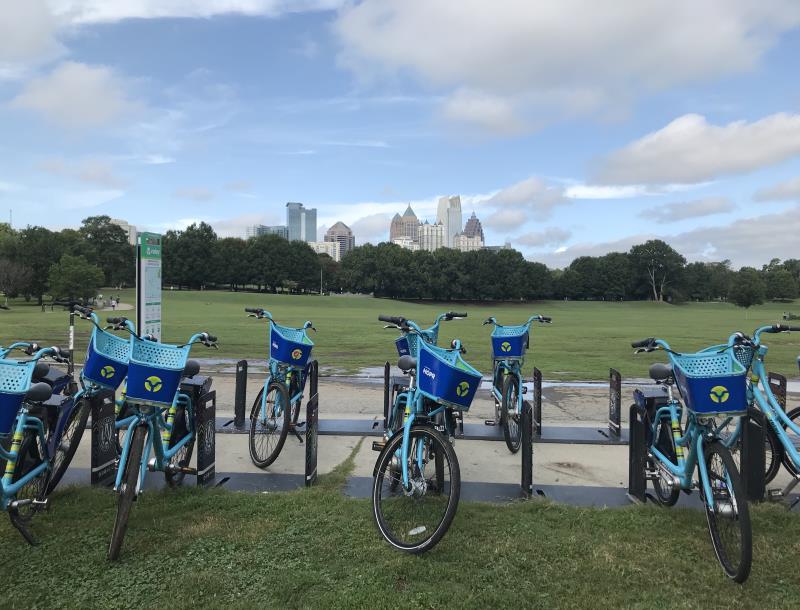 As you come into Piedmont Park, there are so many really pretty views of Midtown, Atlanta, including this one. (Piedmont Park is a whole other tour that I'll do for you soon! It's a car-free park that offers a lot to see and do.) 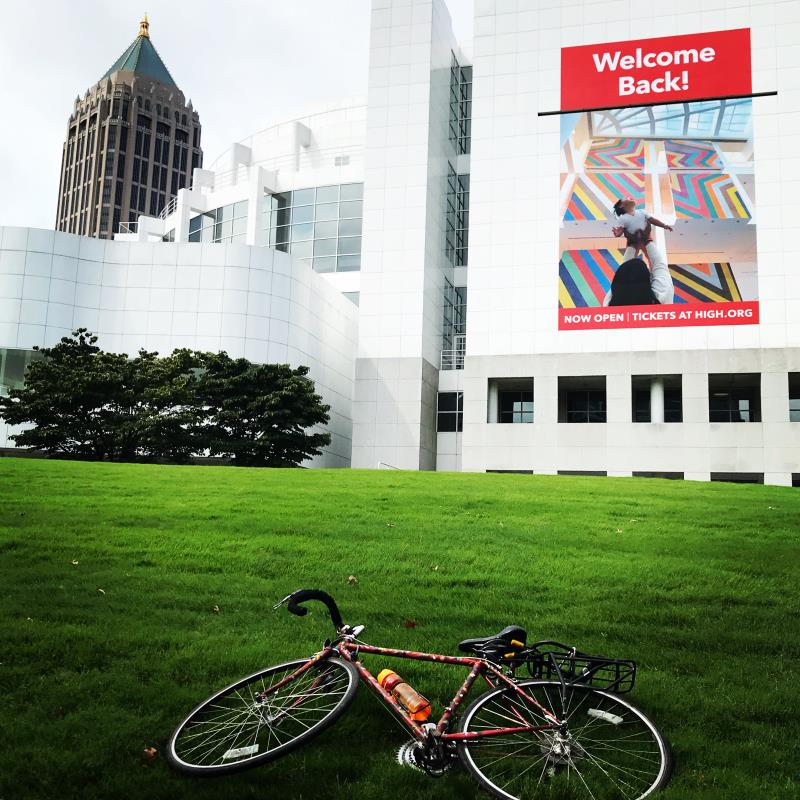 After you ride through Ansley (and, by the way, there's a little park swing you pass where I usually stop and have a snack), you'll suddenly come up to the corner of 16th and Peachtree and you'll see the High Museum of Art across the street. It is part of the Woodruff Arts Center which also hosts the Atlanta Symphony and the Alliance Theatre (it's like the Lincoln Center of Atlanta). I have been a member here for years, and it's the best investment I've made in Atlanta. SO much good happens at this museum, plus there's free public access to the bathrooms and water fountains. There's a Rodin sculpture on the front lawn, by the way, that was gifted to Atlanta from Paris back in the 1960s. Check out that story online. (Pro tip: If you lay your bike on the ground like this, you really should have the chain side up so you don't get debris in it. I always forget.) I discovered this Tiny Door by accident one day when I parked at the bike rack right next to it. FYI, there's another bike rack (covered, by a security desk) down the elevator between SCAD and the High Museum and into the pedestrian walkway to the parking garage. Say hi to the guards for me. They are super nice. It's worth checking out the courtyard area on the other side of the building from the Tiny Door, as there's always some kind of art installation and other things to see. This is the main entrance to the Alliance Theater, which serves to premiere new plays representing a wide variety of seasoned and new voices (it premiered Tony Award-winning plays The Color Purple and The Prom). The playwright in residence, by the way, is the famous and always amazing Pearl Cleage. 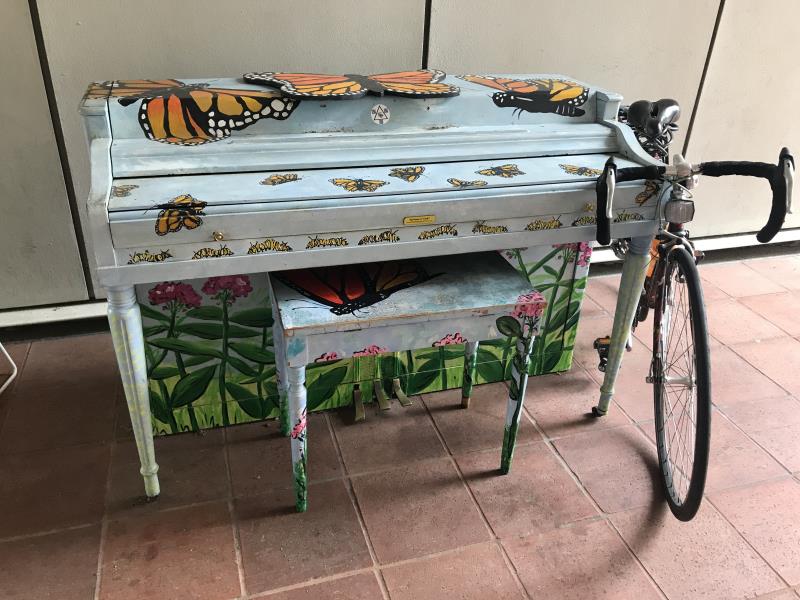 The Alliance may be closed right now, but you can tickle the ivories on the public piano outside its doors. (Be sure to carry hand sanitizer, wipes, or gloves with you for things like this). The remainder of the tour takes you back to the Fox, either via Peachtree or via an alternate route as stated in the cue card and shown on the map (which, please note, is mostly just one block over but is hillier than Peachtree and is a bit circuitous due to buildings that get in the way). There is so much more to discover on this route than what I told you! I hope you have fun. This is just the beginning of what's possible while Traveling at the Speed Bike "beyond the Beltline."